Dr. Shreder is uniquely qualified to be your Aviation Medical Examiner. His passion for flying began long before he became a medical doctor. Upon graduating from Boston College, Dr. Shreder earned his private pilot license. While pursuing a master’s degree at Villanova University he performed experiments and wrote a master’s thesis on pilots’ vision, and workload. Upon graduation, Dr. Shreder began his aviation career at Boeing and then McDonald Douglas, as a cockpit design engineer working on Advanced Rotorcraft Technology Integration. He earned an instrument, commercial, and certified flight instructor ratings.

After 10 years in the aerospace industry, he decided that he would prefer to help people rather than machines. He applied and was accepted to medical school earning a scholarship from the state of Arizona. At age 34, with 2 young children, Dr. Shreder moved to Missouri to study at Kirksville College of Osteopathic Medicine, even with the heavy schedule of medical school he maintained his CFI ratings. Upon finishing medical school, he knew that no matter what specialty he ultimately chose, he would become an AME.

In 2001 while completing his residency he trained with the FAA to become an AME. As other AME’s retired, or moved on, Dr. Shreder adopted his practice to accommodate more pilots while balancing his family medical practice. Unlike many AME’s, Dr. Shreder advocates for other pilots and highly recommends that they do not shy away from being seen as regular medical patients. When medical problems arise, being both the PCP and AME, it puts Dr. Shreder in a unique position to know which tests the FAA will require for special issuance and be able to send correct paperwork for receiving a special issuance. Dr Shreder is experienced in expediting ANY SPECIAL ISSUANCE if it is at all possible! Because the FAA has a well defined protocol for most Special Issuance medical conditions, there is no advantage seeking one AME over another. The AME that will pick up the phone and call on the airman’s behalf, is the one that you want!

HIMS is specific to commercial pilots and coordinates the identification, treatment and return to the cockpit of impaired aviators. Companies, and pilot unions, along with the FAA and your AME work together to preserve the careers and further air safety for specific airman who require this program. The FAA will send you a letter telling you if you require a HIMS AME – it is a select few Senior AME’s like Dr. Shreder who participate in the HIMS program. 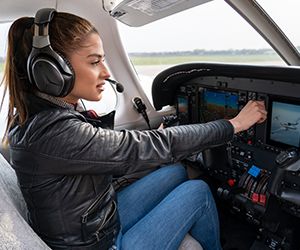 Duration: Airman medical certificates expire in 6 – 60 months depending on age and class, the general rule is:

It is the responsibility of the airmen to send their records to the FAA. Please refer to the article “document drama” AOPA magazine page 122 April 2016, “We strongly encourage you, though, not to rely on the AME or any third party, for that matter, to send your records to the FAA for you. You should assume responsibility for the chain of custody of your records, ensure you mail them to the FAA yourself. Be sure to make copies of everything you send to keep record, in the event your records are lost in transit. For a fee, Dr. Shreders staff will send records on your behalf as a courtesy, but ultimately it is your responsibility. Not just an AME

Our family medicine side of our practice can accommodate pilots and their families with their general healthcare needs including:

These services may be especially important given the FAA’s emphasis on weight loss and sleep apnea.

We at Dr. Shreder’s office look forward to assisting you with your aviation needs.

The fee schedule for aviation visits will be incresasing on July 1st, 2021.